Unfortunately, no wall charger is included with this generation of the Kindle 🙁

If you remember, the 2nd generation to 3rd generation Kindles had close to no changes form-factor wise, the 2011 Kindle however has been changed dramatically from the previous generations! First off, previous versions of the Kindle you had the option between a 3G model and a WiFi only model, well for this version of the Kindle there is only a WiFi version ($99 with ads, $109 without), if you want 3G you’ll have to shell out for a Kindle Touch 3G for $149.

Since this is a next generation device there are obviously many improvements, but with the new price point of this specific kindle, there is some stuff you’ll have to give up! 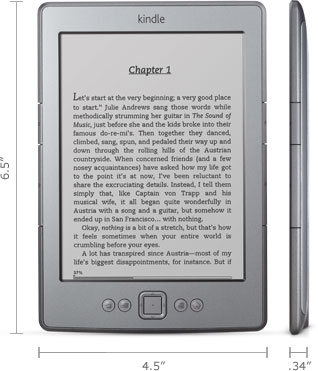 First off, this generation of the kindle weighs around 6 ounces, which makes it about 30% lighter! It’s so light that it feels like you’re just holding a piece of paper, this definitely gives people who read for hours a huge reason to buy! As you can tell from the pictures, they cut the keyboard in this generation of the Kindle, so this gave it a much smaller body, in fact its body has been reduced by 18%, but it still supports the beloved 6″ screen. On the bottom of the device, you’ll also notice some small power ports which should allow accessories to draw power from the device which will be extremely helpful (imagine a case with a built in light that doesn’t need an external battery).

Screen
As stated previously, the 2011 Kindle includes the same 6″ screen size. Well not only did the screen size stay the same, it was actually improved! On the previous Kindle every time you flipped pages the screen would load completely in black and then show the text, well in this generation of the Kindle, it only does that once every 10 or so pages. Thanks to this page refresh improvment, the reading experience will be improved dramatically! Aside from the screen refresh, not much has really changed about the screen, you’ll notice the same contrast ratio and reading angles.

What’s the catch?
Right now you’re probably thinking, “wow, this is WAY better than the previous Kindle, but how is it cheaper and so much smaller?” Well unfortunately there is some give with this new price point… When you buy this generation of the kindle, you’ll notice that there are no speakers or headphone jack located on the device, so that can only mean one thing: No audio books or text to speech. For many people, that’s crucial, so if you’re one of those, you might as well take this Kindle off your list and jump up to the Kindle Touch.

Unfortunately the negatives haven’t ended yet, the last generation Kindle supported a battery capable of lasting 2 months, well this Kindle’s battery life has been reduced to 1 month. This I don’t consider too big of a deal, that’s still an incredibly long battery life, but it’s still something definitely worth mentioning if you’re on the fence about upgrading.

Another deciding factor is that the 2011 Kindle’s amount of onboard storage has been cut in half from 4GB to 2GB. Believe it or not, this makes a bigger dent in number of books then you think since the new Kindle Firmware takes up more space, the 2010 Kindle could carry a total of 3,500 books, when the 2011 Kindle can only support up to 1,400. Although there is a huge drop in the number of books, to be honest it’s not a huge deal either, who needs that many books at a given time? Definitely not me.

You will notice with this device that the software is very similar with some minor improvements.

The most obvious change is that there is now a software keyboard in place of the physical keyboard that existed before. This obviously will be an advantage for the Kindle Touch when it’s released, but for this Kindle… not so much, especially since the keys aren’t arranged in a qwerty layout. Luckily the keyboard isn’t used often enough to be a huge problem.

When reading novels occasionally you’ll come across a word that you may not know the definition of, well traditionally you’ll probably just skip over the word and attempt to figure out it’s definition based on its surroundings, however this may not be easy, well luckily the dictionary present in this firmware is HIGHLY improved in comparison to past versions of the Kindle software.

Aside from the dictionary, the only real noticeable difference from previous Kindles is that the browser is a tad bit faster, but still a terrible experience.

Menus
The menu system is exactly the same as the menus in previous Kindle verisons, the only thing worth mentioning is if you bought the $79 version of the Kindle, you’ll have ads in the menus–You won’t have any ads in the actual reading experience so it’s something that won’t bother most people. If ads are your kryptonite then you’ll have to drop an extra $30 to remove them.

The Kindle is definitely keeping the title of the best e-reader in the business, but now we have multiple Kindles to choose from!

For this specific version of the Kindle, I can only recommend it if you are on a budget and don’t already own a previous generation Kindle. It’s a definite downgrade in comparison to the 2010 Kindle, however it’s the perfect buy for people who hate touch interfaces, want something that just works, and has the Amazon ebook library.